Antisemitism and racism are not the same. But they are both based on the lack of regard to the values this country was founded on: freedom, justice and equality. As a proud immigrant, I deeply believe in these values, admire the dynamic energy of this country, and hope that this unprecedented time helps speed up the process towards realizing these ideals of freedom, justice and equality for all. As an individual and as the executive director of the Fritz Ascher Society, I strive to do my part in this process.

The Fritz Ascher Society tells the stories of artists, who lived and worked in Germany, as the country abandoned its first and very fragile democracy and instead moved towards a totalitarian regime, which defined minorities who did not belong, and united the country by viciously persecuting them. The systematic brutal killing of 6 million Jews that followed is unprecedented in human history.

We look at artists who lived at that pivotal point in history. We show their work, and tell their life story. Most of these artists are still not known, because their artistic voices were suppressed by the National Socialists, and never heard after. We attempt to add their artistic voices to the story of German art, which is so much richer and more complex than the dominant storyline. As we are trying to understand what happened both on an individual and a societal level, we try to learn from that history, to get a better understanding of our present time and build a more just future. 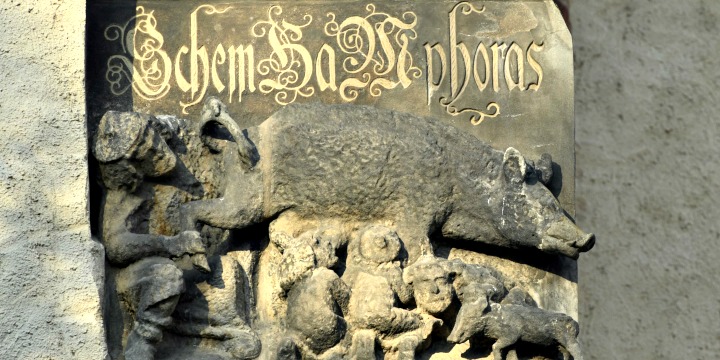 “Judensau” (Jew Sow) from 1305 on the facade of the main church in Wittenberg, Germany, the church where Martin Luther preached. A “Judensau” (“Jew Sow”) is an image of Jews in obscene contact with a large sow (female pig), which appeared during the 13th century in Germany and some other European countries, and whose popularity lasted for over 600 years. Until today, the “Judensau” can be found on facades and inside German churches and cathedrals.

At this pivotal moment, history is revisited. We aim to provide a platform to think about and discuss questions of who writes history and how, and what we do if the way that history is told does not seem right any more. Please join us this coming

Wednesday, July 15, at 2:00pm ET/20:00 Uhr CEST for
British historian Zoe Strimpel’s talk
“Rhodes Must Stand: a lightly Jewish perspective on why we must learn to live with the past, not destroy it.”
Please register for the Zoom event HERE.

Since the Black Lives Matter movement gained new urgency following the police murder of George Floyd, much material – not just statues and monuments to the past but culture more broadly – has been flagged as racist and therefore undeserving of a continued place in the public sphere. Recently, Dickens has attracted the condemnation of anti-racists. But nobody has ever, or is likely to, pore over the anti-Semitic connotations or history of art or industry. Jews have learned to live with the prominence of Wagner; of authors from Trollope to Kingsley Amis, with statues to Martin Luther, and with the ubiquity in Christian architecture and iconography: the Judensau of Cathedrals all around Europe. But in living with the past, we do not lose out – on the contrary, we are greatly enriched.

We are thrilled with the positive feedback we received for our new monthly digital series “Fight or Flight. stories of artists under repression”. Thank you to Allianz Partners for generously sponsoring our digital initiatives! Those who missed the events about Hedda Sterne (Bucharest 1910 – 2011 New York) and Hans Hofmann (Weissenburg, Bavaria 1880 – 1966 New York), can watch the recording HERE. You asked, we listened: The upcoming events will be scheduled at an earlier time in the day, so our audience in Europe can better participate. The next event of this series will be on

Wednesday, August 5, 3:00- 4:00pm ET.
Eckhart Gillen from Berlin will speak about
”Jewish Identity and Communist Belief. Lea Grundig’s Path from Dresden to Palestine and back to Dresden.”
Please register for the Zoom event HERE. 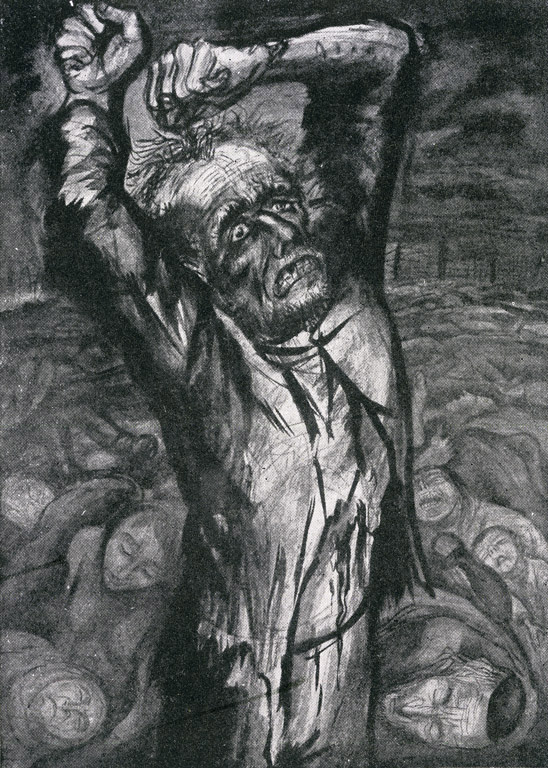 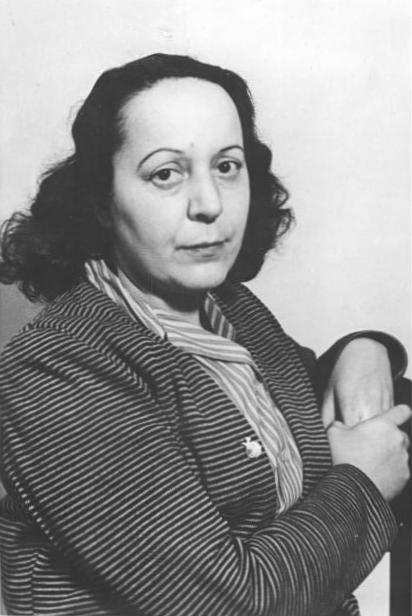 The lecture tells how the daughter of the Jewish clothing and furniture retailer Moritz Langer leaves her family’s Orthodox milieu to study at the Dresden Art Academy. There she meets art student Hans Grundig. With him she joined the German Communist Party in 1926. From now on she wanted to put her art at the service of the working class. After returning from exile in Palestine, she used her art for the newly founded GDR. There she had a career as a professor and as president of the Association of Fine Artists of the GDR. In this function, she unconditionally served the official art policy of the SED and also supported the “anti-Zionist” anti-Semitic policies of the GDR.
But the communist Lea Grundig is only one aspect of her life and work. The accusation of being a degenerate artist in the sense of Nazi terminology and the prohibition of pictures and memories of the genocide of the Jews became a test for the loyalty of the faithful communist and self-confident Jew Lea Grundig.

For this fall, we are preparing an active digital program, as well as the exhibition “The Loner. Clowns in Fritz Ascher’s Art (1893-1970),” which opens September 6 at the Forum Jacob Pins in Höxter, Germany (MORE INFORMATION HERE) The exhibition explores the importance of the Bajazzo theme in Ascher’s work and in a historical context, but also in direct comparison with the clowns that Jacob Pins (1917-2005) created after 1945. At the same time, Ascher’s radical break in subject matter and medium can be experienced in the immediacy and intensity of his late landscapes, which celebrate survival and the continuity of nature. The exhibition includes drawings and lithographs, gouaches and oil paintings, some of them never seen before. Hold the date!