Catch it while you can: The exhibition “Fritz Ascher, Expressionist” at the Grey Art Gallery of New York University here in New York is on view only until April 6. You can find installation photos of the exhibition on our website (link).

And for the last minute people among you: on April 3 at 6:30pm there is a gallery conversation with J. English Cook, Graduate Curatorial Assistant, Grey Art Gallery, and Ph.D. Candidate, Institute of Fine Arts, NYU.

In the exhibition, you can see Fritz Ascher’s gouache “Uncle Tom’s Cabin.” It depicts a settlement of 1,100 flats and 800 detached houses in Berlin Zehlendorf that borders the Grunewald city forest in the South. It was built in 1926-1931 by the architects Bruno Taut, Hugo Häring and Otto Rudolf Salvisberg, following revolutionary architectural ideas based on clarity and simplicity of design, today known as Bauhaus. In this settlement, the houses were built in rows, using a very limited number of house types. The structure of the buildings and a coordinated color scheme avoided monotony and created differentiated urban spaces. The trees were also included in the planning, so that a close proximity of nature and architecture could be preserved. 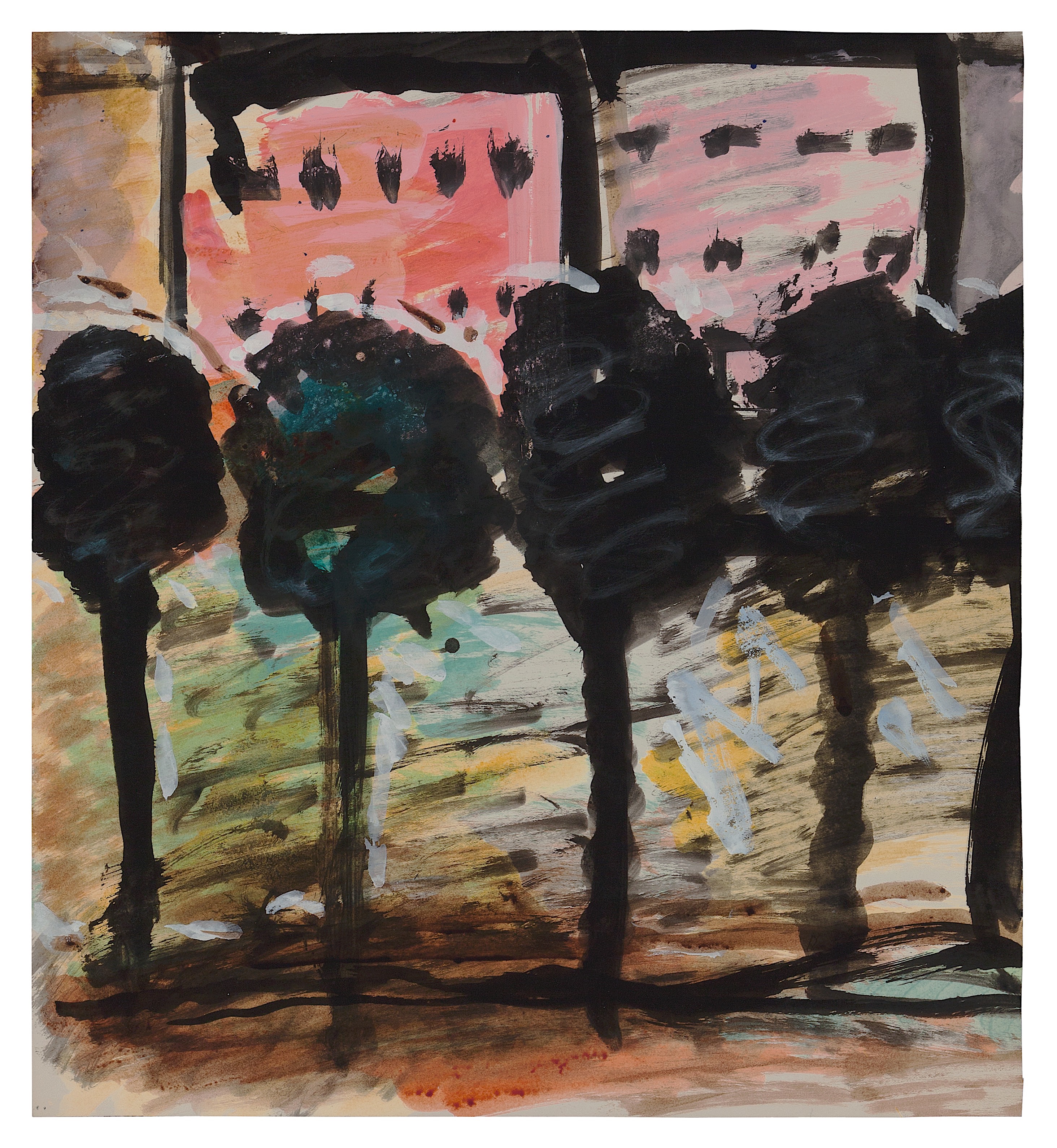 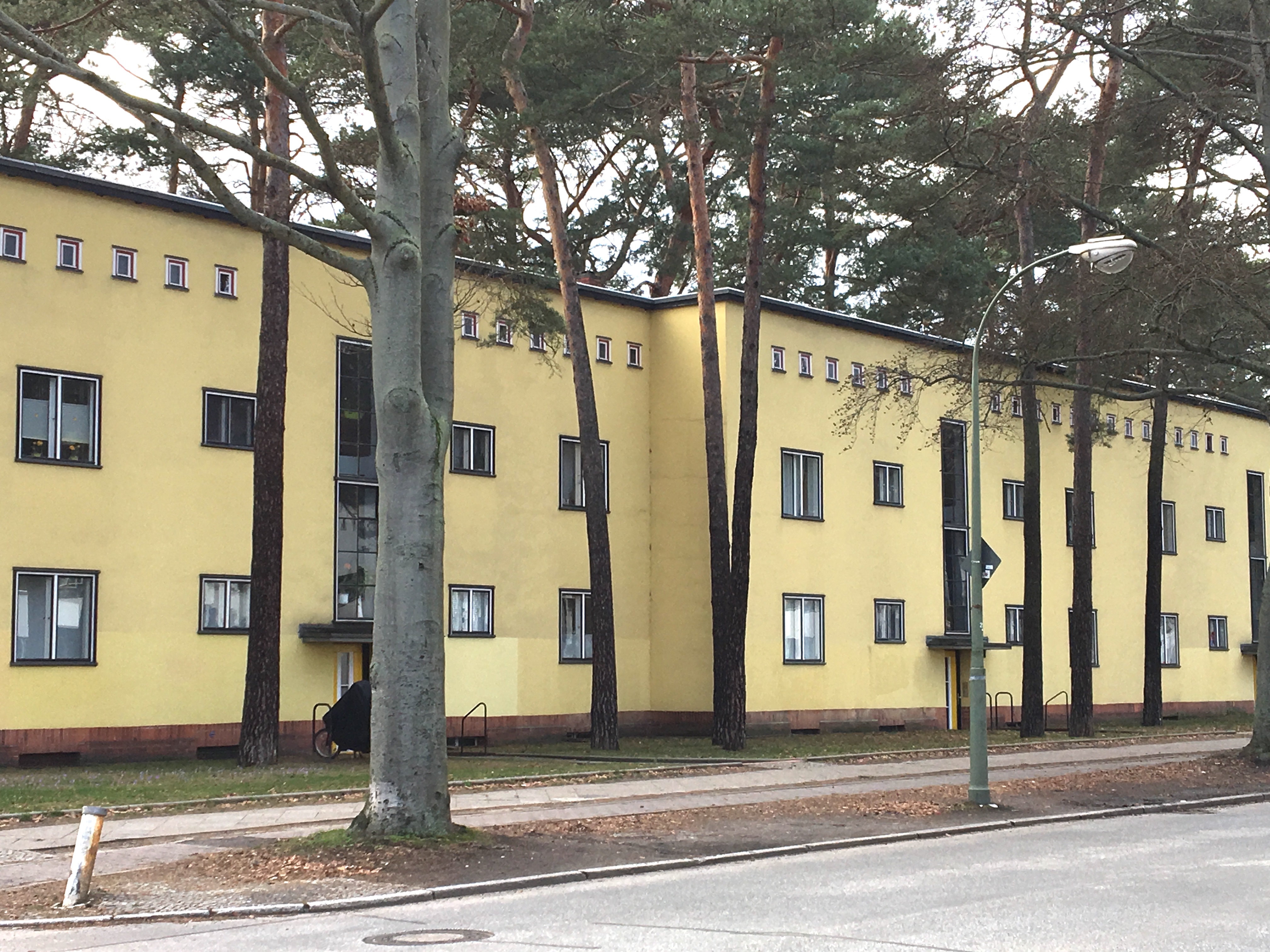 The Bauhaus existed in Germany from 1919-1933 and was a German art school founded with the idea of a harmony between the function of an object or a building and its design (“form follows function”) and the desire to create a “total” work of art (Gesamtkunstwerk) in which all arts, including architecture, would eventually be brought together. It was the 20th century’s most influential school of art and design with an international impact that continues until today.

In celebration of the centennial of the 1919 founding of Bauhaus, we offer Fritz Ascher’s drawing, but also alert you to the numerous exhibitions devoted to the Bauhaus, it’s artistic achievements and international impact. Exhibitions and events in Germany can be found at https://www.bauhaus100.de. Here in the United States, the Harvard Art Museums own one of the first and largest Bauhaus collections, featured in the exhibition “The Bauhaus and Harvard,” which is on view until July 28 (link). In New York, the Bard Graduate Center celebrates the impact of the Bauhaus on typography in the exhibition “Jan Tschichold and the New Typography,” which is on view until July 7 (link). But these are only two of many noteworthy exhibitions not to be missed.

Coming back to Fritz Ascher, we pick up the mood of this week by looking at the clowns he depicted. The New York exhibition is the only venue, in which two of Fritz Ascher’s sketchbooks can be seen, because they are too fragile to travel.  So do not miss the chance to get this intimate insight into the artist’s thought process on paper, here preparing his painting “Bajazzo and Artists” from the same year. 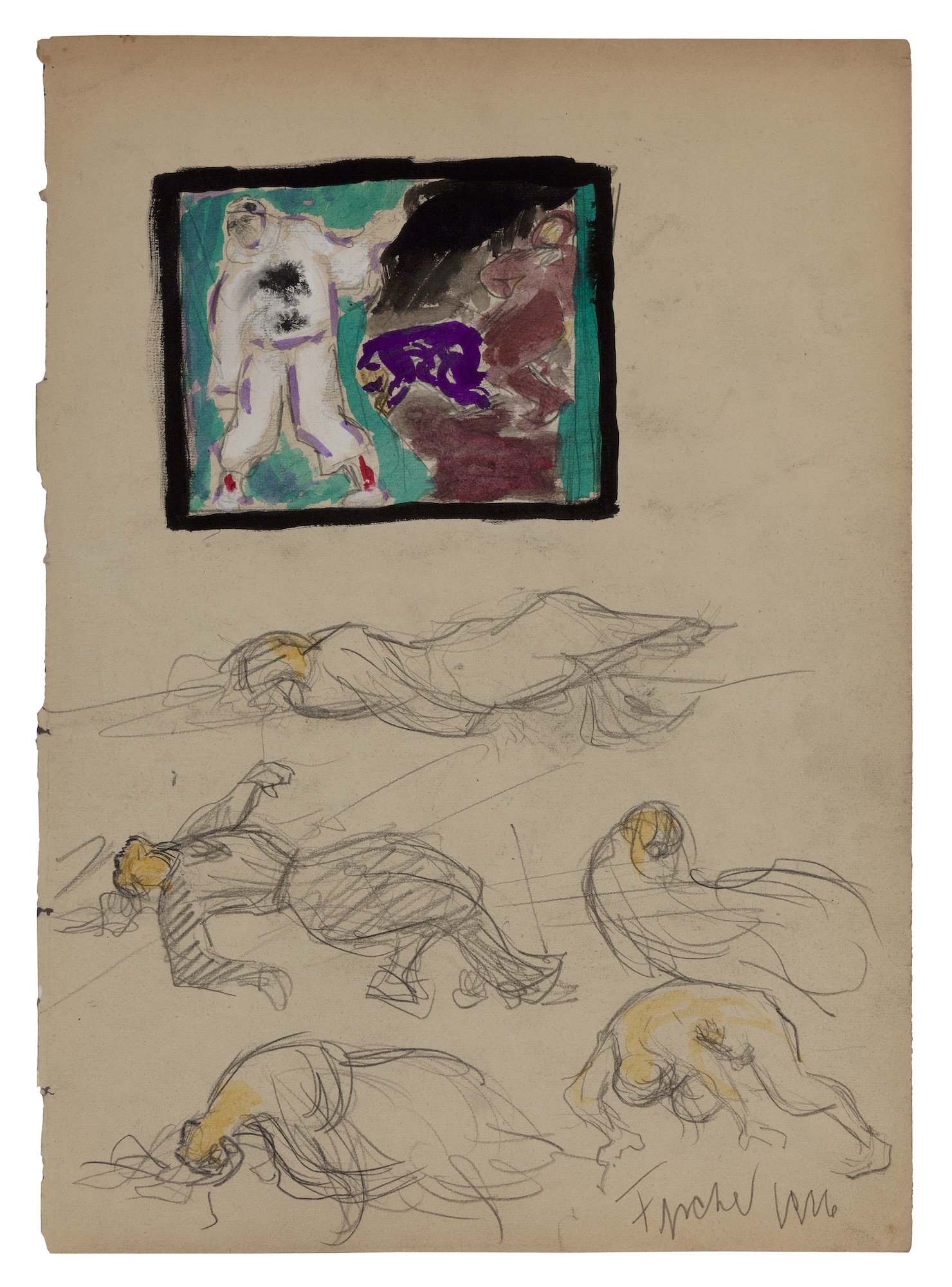 Ruggero Leoncavallo’s opera “Pagliacci” (Clowns) was a theme that he explored in multiple drawings. In the opera, Canio, the head of a troupe of comedians, finds out that his wife Nedda has an affair with the farmer Silvia. During the performance he kills both his wife and her lover.

‘Vesti la giubba’ (‘Put on the costume’), the most moving aria that is sung at the conclusion of the first act, when Canio discovers his wife’s infidelity, but must nevertheless prepare for his performance as Pagliaccio the clown because “the show must go on” (here in a recording from 1902). Canio’s pain exemplifies the entire notion of the “tragic clown”: the clown who weeps within (usually because of a heart broken by unrequited love) as he dons his make-up to make the people laugh—who have paid their money to laugh.

This week, we celebrate Purim, a holiday that commemorates the saving of the Jewish people from Haman, who was planning to kill all the Jews in ancient Persia in the fourth century BCE. This is the most joyous of the Jewish holidays – look out for clowns and other creative and fun dress-ups! Did I mention that it was a woman, Esther, who defied all odds and saved the Jewish people?

Purim Sameach and
all best wishes,