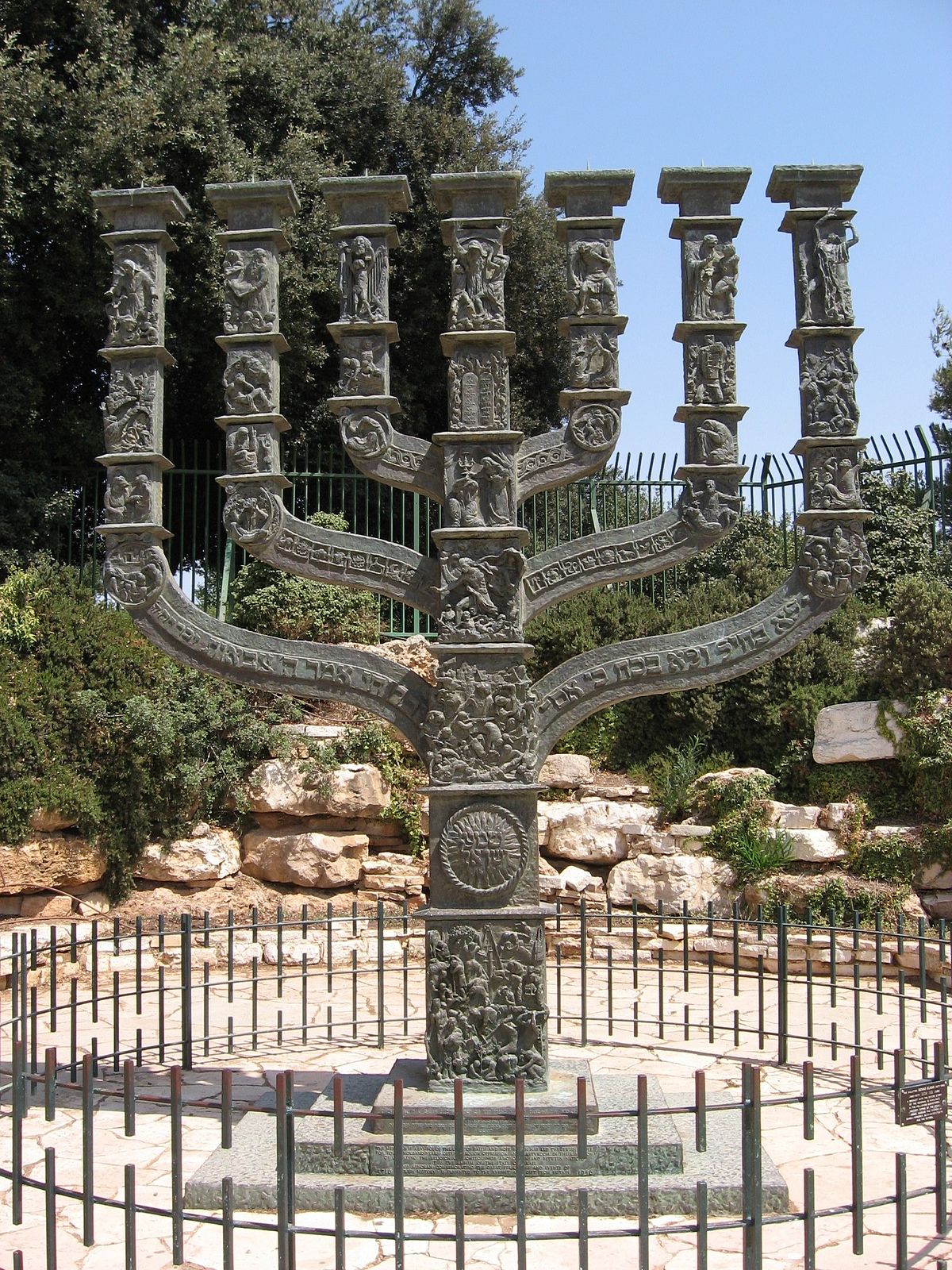 Born 1877 in Dortmund, the sculptor Benno Elkan (1877-1960) first studied painting in Munich and Karlsruhe. At the end of his studies, he turned to sculpture. As a young artist, he spent time in Paris, Rome, and Frankfurt.
Elkan’s oeuvre was largely made up of commissions. In the beginning, he mainly created tombs. Medals, portrait busts of well-known personalities, monuments to victims and candelabras follow, partly for the religious (Jewish and Christian) context.

Elkan fled persecution by the German Nazi regime to Great Britain in 1934and lived with his family in London until the end of his life. Perhaps the most important work besides the Menorah in Jerusalem (1956) was never built: Memorial to the Defenseless Victims of the Bombing War (clay model 1959). This monument was re-created from the preparatory works and can now be experienced as a virtual animation by visitors of the Museum of Art and Cultural History in Dortmund.

IMAGE: Benno Elkan, Menorah, 1956. Bronze, 4.30 meters high, 3.5 meters wide. Gan Havradim (Rose Garden) opposite the Knesset, Jerusalem. Presented to the Knesset as a gift from the Parliament of the United Kingdom Parliament on April 15, 1956 in honor of the eighth anniversary of Israeli independence.

Lectures by
Christian Walda, Deputy Director and Head of Collections at the Museum for Art and Cultural History in Dortmund (Germany)

Wolfgang E. Weick, Director Emeritus of the Museum for Art and Cultural History in Dortmund (Germany)

The Memorial to the Defenseless Victims of the Bombing War
Ori Z. Soltes, Teaching Professor at Georgetown University in Washington DC
The Menorah, Jerusalem

After training as a bookseller, Christian Walda studied art history, philosophy and political science at the University and the College for Jewish Studies in Heidelberg and at the University of Siena, Italy. Research focusesd on art philosophy, the theory of corporeality, political art and forms of aesthetic memory work. In 2007 he completed his studies with a doctorate on the Austrian sculptor Alfred Hrdlicka. Christian Walda has curated and organized more than thirty exhibitions with a focus on contemporary art. A large exhibition with works by the German painter and sculptor Rainer Fetting is currently on view in the Dortmunder U. 2008-2014 he was the director of the Jewish Museum Rendsburg, 2015-2018 the head of the painting collection of the State Museum for Art and Cultural History in the Schleswig-Holstein State Museums Foundation at Gottorf Castle. Since 2019 he is at the Museum for Art and Cultural History in Dortmund as head of collections, and since 2021 also as deputy director.

Wolfgang E. Weick studied History, English, Political Sciences and Contemporary History at the University in Mannheim (BA) and the University of Waterloo (Ontario) in Canada (MA). 1979 – 1986 he worked as researcher and curator at Berliner Festspiele GmbH and Senate Department – Department of Culture in Berlin. In 1986/87 he was the head of the development team and deputy director at the House of the History of the Federal Republic of Germany in Bonn. From 1988 until 2014 he was the Director of the Museum for Art and Cultural History in Dortmund, and from 1995 also division manager of the municipal museums in Dortmund.

Ori Z Soltes teaches at Georgetown University across the disciplines of theology, art history, philosophy and politics. He is the former Director and Curator of the B’nai B’rith Klutznick National Jewish Museum where he curated some 80 exhibitions. He is the author of several hundred articles and catalogue essays, and the author or editor of 24 books, including The Ashen Rainbow: The Holocaust and the Arts; Symbols of Faith: How Jewish, Christian, and Muslim Art Draw from the Same Source; and Tradition and Transformation: Three Millennia of Jewish Art and Architecture.

The event is part of our monthly series
Flight or Fight. stories of artists under repression, which is generously sponsored by Allianz Partners.