Fritz Ascher is getting a “Stolperstein” (stumbling stone)! Please join us for the ceremony on Wednesday, February 21 at 11:00am at Niklasstr. 21/23 in Berlin-Zehlendorf

Stolpersteine (stumbling stones) is a project of the artist Gunter Demnig. The project commemorates people who were persecuted by the Nazis between 1933 and 1945.
Stolpersteine are concrete blocks measuring 10x10cm which are laid into the pavement in front of the last voluntarily chosen places of residence of the victims of the Nazis. Their names and fate are engraved into a brass plate on the top of each Stolperstein.
In Berlin, thousands Stolpersteine were installed since 1996. Today, Stolpersteine can be found in 1099 German cities and in 20 European countries.
(link) 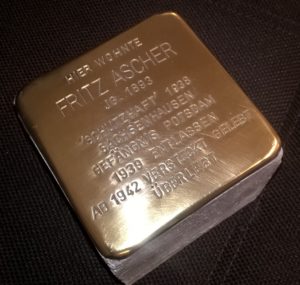 We are so happy that the Fritz Ascher retrospective got showered with press – both in Berlin and in Potsdam. Both exhibitions are on view until March 11, with exciting programs coming up.

Two lectures at the Museum Charlottenburg-Wilmersdorf in der Villa Oppenheim in Berlin promise to be interesting:

On February 8 at 6:00pm, museum director Dr. Sabine Witt is speaking about Fritz Ascher’s work in the lecture “Kein Leben ohne Träne” (No Life without Tears).

On Wednesday, February 14 at 6:00pm, Wiebke Hölzer is speaking about Fritz Ascher in the context of Modern Art. (link to museum) 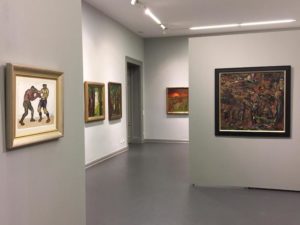 On March 10 at 5:00pm, the Women Vocal Ensemble Berlin will perform “Melancholie, Licht und Gesang” (Melancholy, Light and Song), the world premier of a musical rendering of Fritz Ascher’s poems. (link to museum) 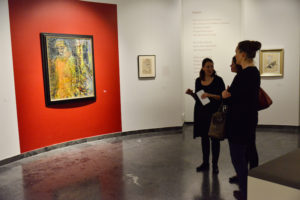 In February, the “artist of the month” is Hans Grundig (Dresden 1901 – 1958 Berlin). He was born on February 19, 1901 in Dresden and, after an apprenticeship as an interior decorator, studied in 1920–1921 at the Dresden School of Arts and Crafts, and in 1922-23 at the Dresden Academy, along with Otto Dix. Grundig drew the city and its inhabitants as he saw them: simple, forthright and without pity.

Politically anti-fascist, he joined the German Communist Party in 1926, and was a founding member of the arts organization Assoziation revolutionärer bildender Künstler in Dresden in 1929.
Grundig was declared a degenerate artist by the Nazis, forbidden to practice his profession, and his works were included in the defamatory Degenerate Art exhibition in Munich in 1937. In a series of etchings from this time titled Tiere und Menschen (Animals and Humans) (1933 -1938), Grundig used an animal metaphor to expose the political system. There are slavish dogs who attack in packs, following orders. And there are pigs – ugly, mean and stupid – getting fatter and mightier than ever. And there are horses, which never tear apart living beings, don’t shed blood and don’t threaten others. They stand for the people who are being hunted, but they also fought back. In his famous anti-war work The Thousand Year Reich (1935-38) he predicted Germany’s impending destruction.

In 1945, Grundig went to Moscow, where he attended an anti-fascist school. In 1946, he painted “Victims of Fascism”, a monument to those who were killed. He returned to Germany in 1947, and was made Rector of the newly reopened Dresden Academy of Fine Arts (Akademie der bildenden Künste), where he also taught painting. Hans Grundig died in Berlin in 1958. His work can be discovered until the end of the month on our Twitter feed @Ascher_Society

Here’s to freedom of speech!