Best wishes to our Jewish friends in 5776! May it be a good and peaceful year for everyone.

A few days ago, the exhibition “»Making Amends« Compensation and Restitutions in a Divided Berlin” was opened at the Gedenkstätte deutscher Widerstand in Berlin. The exhibition, which was organized by a team of the Aktives Museum and the Gedenk- und Bildungsstätte Haus der Wannsee-Konferenz Berlin is celebrating the 70th anniversary of the liberation from the Nazi terror regime with this in-depth examination of the practice of restitution after 1945. Especially in Berlin, where during the Cold War two completely different concepts of restitution existed side-by-side, their political framework and its consequences for the restitution procedures can be demonstrated like nowhere else.
The struggle to find suitable methods for assessing suffering and providing compensation and reimbursement shows the difficulty in addressing unprecedented crimes through practicable bureaucratic procedures. It also reveals how the victims of National Socialism were treated in post-war Germany.
27 individual cases vividly present diverse groups of victims and restitution procedures in Berlin West and East. They illustrate the repercussions of the often lengthy procedures for the victims. At the same time, the sociopolitical parameters can be determined that caused late restitution to specific groups of victims. In addition, the players of these proceedings – organizations of victim groups as well as lawyers and government representatives – are portrayed.
Fritz Ascher’s ordeal during the Nazi terror regime is told with his imprisonment in the concentration camp Sachsenhausen during Reichskristallnacht in 1938, his transfer to the Potsdam prison, then his release, and his survival in hiding; his fight for rightful compensation after 1945, as well as his artistic triumph in drawings and paintings.
“»Making Amends« Compensation and Restitutions in a Divided Berlin” is on view until January 14, 2016 at the Gedenkstätte deutscher Widerstand, Berlin.
http://www.gdw-berlin.de/nc/de/angebote/ausstellungen/ausstellung/view-aus/verfahren-wiedergutmachung-im-geteilten-berlin/

Wiebke Hölzer from Berlin will speak about “The depiction of Jewish and Christian Themes in the Œuvre of the Expressionist Artist Fritz Ascher” during the conference for junior scholars of Judaic Studies at the Goethe Universität in Frankfurt/Main on November 15-17, 2015.
http://www.uni-frankfurt.de/52124553/buber-cfp-nachwuchstagung2015

Dr. Jörn Barfod, Curator of the East Prussian State Museum in Lüneburg, recognized in one of Fritz Ascher’s earliest drawings the death mask of Frederic the Great, the notorious ruler of Prussia. The drawing is dated (III) January 1912, coinciding with the anniversary of Frederic the Great’s 200th birthday on January 24, 1912. Barfod explains, “At that time, the death mask was very popular in Prussia, for example as wall decoration in private houses. It would not be surprising if the Königsberg Academy of Art owned a plaster cast of the mask.”
Even today one can purchase a copy of the now lost original wax cast, for €149.00 at http://shop.buestenfuchs.de/product_info.php?products_id=128&MODsid=dv8j77s220tvhi963m41ocg7e4, shown below. Aschers draws the narrow bony face with closed eyes and the nose that famously continued in a straight line from the forehead, it even copies the cut-off ear of the cast. 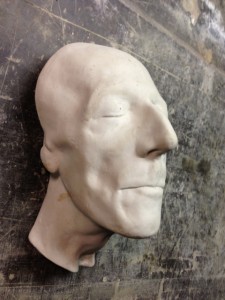 Have a good winter,